The Adhaalath Party, Maldives’ chief ‘Islamists’, is one of the worst things to ever happen to the country and its people. Although it was three years of free expression under Mohamed Nasheed that finally gave the men of Adhaalath a voice after about a decade of violent repression, they were instrumental in bringing an abrupt end to democratic rule on 7 February.

Last night’s speech by Adhaalath Party leader Imran Abdulla at the Jumhooree coalition rally was a spectacular example of these men’s hate-mongering using Islam. Imran described MDP supporters as a crowd of hapless, irreligious and malicious imbeciles who have fallen under an evil spell cast by their Godless master Nasheed.

Imran explained away his obsession with Nasheed and his inability to stop ranting about him as a religious duty.

It’s not personal. I am devoting so much time to Nasheed because the Qur’an says the ignorant should be made aware […] Nasheed is an enemy of Islam. He is an agent  trained, briefed and sent here by people who want to destroy Islam and our nation.

Imran also said there is a verse in the Qur’an that applies to Nasheed. Here is a translation:

The whole affair ended with the other limelight loving Fake Sheikh, Ilyas Hussein, who shed crocodile tears while praying to Allah that the Maldives be saved from  Godless Nasheed and his evil. It was a performance that would have put even the most accomplished of televangelists to shame.

While Imran and Ilyas are wheeled out to entertain big crowds, the other Adhaalath high-flier, Shaheem Ali Saeed, now the Islamic Minister, provides the ‘intellectual’ backing through hate-filled speeches to less prominent crowds which are then duly covered by Adhaalath mouthpieces in the media.

One such platform, Dhiislam.com reported yesterday, for example, that Shaheem told an audience in the island of Mahibadhoo that he regularly prays to Allah for misfortunes to befall on Nasheed. Shaheem was kind enough to share the details of what he asks of Allah when he is on his knees, praying:

“Oh Allah! Set a dog from among your dogs on this man [Nasheed]!”

All this may have been understandable even if not justifiable if these men actually believe in what they preach. They don’t. If they did, they would have called for the removal of Ali Hameed from the Supreme Court bench after half the population were subjected to a video of him having sex with three prostitutes in a Colombo hotel.

These are the same people who were out on the streets of Male’ in November 2011 when UN Human Rights Commissioner Navi Pillay dared to call for an end to the cruel practise of flogging for fornication that Adhaalath so enthusiastically promotes. These are also the people who in February this year said a fifteen year old girl, a victim of repeated rape and sexual abuse, ‘deserved’ to be flogged for a separate incident of fornication.

These same people, who want the Maldivian legal system to comprise entirely of Sharia, have not only remained silent about Ali Hameed, they have also failed to say a single word about the alarming increase in sex crimes registered in the last few months. You would think that this is a time when religious leaders, so obsessed about punishing people for consensual sex, would counsel their followers to stop using sex as a tool of violence against women and children.

There is little doubt in my mind that a Supreme Court judge getting away with Zinah—one of the most serious of Sharia offences—is a contributing factor to the impunity with which sex offenders are now operating on our little islands.

Another strong indication of how fake these Sheikhs are is the type of alliances they choose to make. There was the 2008 alliance with the ‘Laa Dheenee’ MDP, then the 2012 alliance with the pseudo-American Waheedh, and now the backing of Gasim Ibrahim as their presidential candidate. Not only did Gasim defend Ali Hameed’s position as a Supreme Court judge, he is also the biggest seller of alcohol the country has ever seen.

I have no problem with Gasim running tourist resorts and selling alcohol/pork. But Adhaalath does. In 2010 they ran amok in Male’ protesting against government plans to allow the sale of alcohol at tourist abodes in inhabited islands. Witnessing it, one would have thought that even looking at alcohol would have left the Muslim faith of Maldivians as legless as a drunk stumbling out of a bar at closing time. Plans to sell alcohol is also one of the reasons Adhaalath cited when severing its alliance with MDP in September 2011. But now here they are, arm in arm with Gasim, vowing to ‘Defend Islam’ with their candidate as president.

The double-standards are just astounding. Here, for example, is a picture that emerged in the social media yesterday of a Jumhooree Party function on one of Gasim’s resort islands. 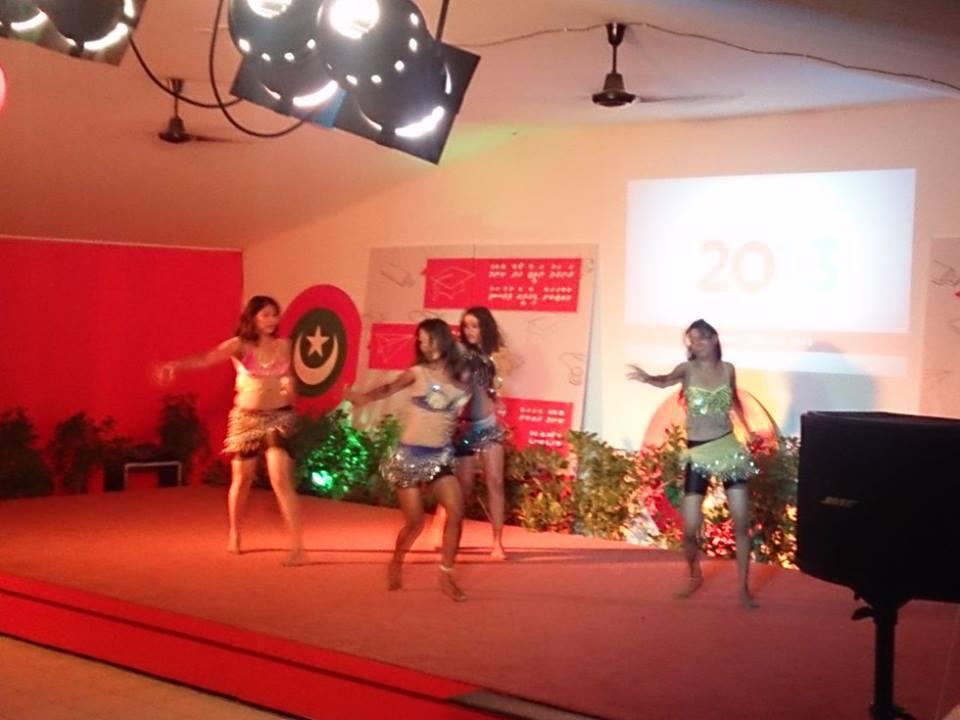 Have you seen the many signs that Adhaalath Party put up everywhere in Male’ and all surrounding islands banning bikinis? Is it the case that Maldivians can be as free as they like in what they wear or not wear as long as Adhaalath approves?

Recall all the flesh on display at the re-opening ceremony of Olympus in March this year. That was all okay, too, because at the time Imran was in bed with Waheed who was going through his Mujaheddin phase, which was preceded by his Siri Siri phase, which itself probably came after his Scientology days.

And let’s not forget Gasim’s—and therefore Adhaalath’s—running-mate. Dr Hassan Saeed co-authored the book Freedom of Religion, Apostasy and Islam, arguing that the law of apostasy and its punishment by death in Islamic law conflicts with a variety of fundamentals of Islam. It is a position directly in contrast to Adhaalath’s which is that all apostates should be put to death. Unless the only thing Hassan Saeed contributed to the book was his name on the cover, this man has done one of the most astounding volte-faces I have encountered in the academic community. Adhaalath banned his book in the Maldives but there he is now, sharing not just a podium but the same views with Adhaalath.

Adhaalath continuously speaks about Laa Dheenee [irreligious] Maldivians damaging the ‘social fabric’ of the country. But it is they who have ripped our tight-knit communities apart, and unravelled the thread of quiet faith that bound Maldivians together in an invisible yet strong bond for as long as anybody alive today can remember.

Of course, criticism of Adhaalath is a sin punishable by death (by Adhaalath, in this world). Some have been killed, others have been almost killed, and several others are under constant threat from the militant wings of these gangsters operating as ‘Jihadhists’. It is thus online that most dissent against Adhaalath takes place, and it is on Twitter that #FuckAdhaalath began and continues to grow.

Ohh people are fucking the Adhaalaths with a new spirit. Herr goes mine. #FuckAdhaalath 4 times

It’s good that more people are standing up to Adhaalath on social media. But that’s not the only place for the sentiment to remain. It is one worth expressing. Not for some gratuitous love of profanity but to let Adhaalath leadership know there are many Maldivians who will not be cowed by them and see them for the hate-mongering gangsters they are.